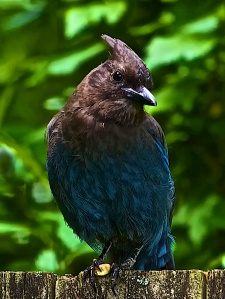 I have many pictures of this beautiful Stellar Jay, and yes, I know it’s the same one.  He has a bald spot on the top of his head where he was either picked on or had a fight with a bigger bird.  Sadly shortly after this picture was taken, he now has a broken foot.

He comes to me in the morning and late afternoon.  “I can’t jump up on the suet” he seems to say as he stands below it, after numerous attempts to attach his claws to the steel rungs holding his favorite morsels.  So…..I took it down and propped it against a stump I use as a plant stand, very close to me.

Now our ‘close encounters’ are even closer.  The sound of my voice brings him even closer and now sometimes he just sits and stares at me, his one foot twisted and useless.  I will get a recent picture of him, but for now I want him to feel comfortable.  He can’t stand on the water bowl as his balance is not good yet, so I put a small bowl of water beside the suet.  Interestingly he hasn’t drank from it yet. As the days go by, he is getting stronger

I am so amazed at God’s wondrous creatures.

Update:  He is drinking on his own (click on picture for full view of his amazing transformation).

One thought on “A New Friend and updates to his progress.”

Follow Words and Pictures tell the stories on WordPress.com

Words and Pictures by Patti Bradfield